They sure know when they are being photographed. Steller's jays getting new shirts I wasn't happy with the original shirt so covered it with a thin coat of gesso. I have mixed feelings about this bird Such a beautiful bid. I think Steller's Jays have some of the most incredible feathers that I've ever seen! Fortunately we only encountered a little bit of misty rain before making it back down the mountain.

These Stellers Jays have beautiful color but boy they can screech! Two Steller's Jays appear to be perfectly well camouflaged in the background of the blue sky and dark tree branches. I flat out love Steller's Jays, especially in Spring when they're more active and interactive.


This may be one of my best technical captures of a Jay. This handsome, healthy bird repeatedly stood for me at the Whistler cabin, as if it somehow sensed that I was trading snacks for the opportunity to properly capture it's countenance.


Note the very relaxed crest What a privilege for me to be so trusted by these boisterous, energetic and noticeably intelligent birds! Steller's Jay. A Steller's Jay on a beautiful day.

Steller's Jays have a vast repertoire of sounds and are fantastic mimics. They have been known to imitate other animals and environmental sounds including Northern Flickers, Northern Goshawks, squirrels, and even water sprinklers. A daily visitor at the Whistler ski cabin, this fellow always watched me intently, chatting constantly, and I usually rewarded him for it.

They're talented mimics, and fool even avid birders with its mixed bag of voices that can range from hawk calls to warblings of other songbirds. Sierra Nevada, California. The Steller's jay is a jay native to western North America, closely related to the blue jay found in the rest of the continent, but with a black head and upper body. It is also known as the long-crested jay, mountain jay, and pine jay. It is the only crested jay west of the Rocky Mountains. Another one from the book, Steller's Jay, will definitely need to go on a trip to the Pacific Northwest to see these birds in real life!

A Steller's Jay looking stoic and completely camera ready. Here's a round boy! Steller's Jay study Day It's been a little while since I posted a picture of a Steller's Jay. This is one of my favorite birds to photograph. They are such beautiful birds and very photogenic. They love to pose! This one is from sometime in June in my backyard.

Day A heart without dreams is like a bird without feathers. We rarely get close enough to Stellers Jay in the PNW but for some reason they were everywhere and undeterred by human proximity. We were just a few feet away for this photo. I hiked up Cypress Mtn and found this Steller's Jay.

He came and landed on my hand for food. It was the first time I ever had this happen! What a thrill. Gotta appreciate those little special moments in life, especially in today's trying times. The backside colors of a Steller's Jay.

A Stellers Jay just robbed a peanut from a chipmunk at the campsite. They were looking really "Steller. Hiked to Nevada Falls today! Steller's Jay catches the ant. What a classic, West Coast, early Summer scene! Few "teenagers" equal the noise and compelling presence of young Steller's Jays. These huge young birds follow their parents everywhere, beg for food and basically harass the parental units until those drop from exhaustion. They in turn brought the next generation. The cycle of noisy Jay life is a delight to watch! 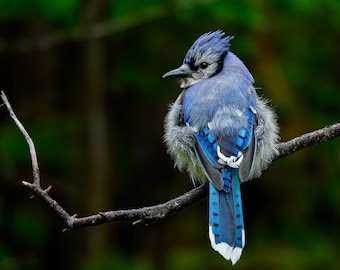 Elizabeth was still wearing her tan suit, but had removed her jacket, revealing one holstered. A small black and white TV sat on the counter, tuned to one of the networks, the volume low. The lead story was about a presidential visit to some strange place where everyone was short. Max said to the two guys, "This is Detective John Corey, homicide," and let it go at that without mentioning that my jurisdiction began and ended about a hundred miles west of here. Bluejeans and said, "… and this is Ted Nash, Department of Agriculture.

We shook hands all around. I informed Penrose, "Giants scored in the first minute of the third quarter. Penrose, who was closest to the TV, heard something on the news and raised the volume.

We all focused on the screen. A female reporter was standing in front of the Gordon house. We missed her lead-in and caught, "The victims of the double murder have been identified as scientists who worked at the top secret government animal disease laboratory on Plum Island, a few miles from here.

An aerial shot now showed Plum Island from about two thousand feet. It was bright daylight, so it must have been stock footage.

How To Nurse Baby Blue Jays????

From the air, the island looked almost exactly like a pork chop, and I guess if you wanted to stretch an irony about swine fever… Anyway, Plum is about three miles at its longest, and about a mile at its widest. The reporter, in voice-over, was saying, "This is Plum Island as it appeared last summer when this station did a report about persistent rumors that the island is home to biological warfare research. Aside from the hackneyed phrases, the lady was right about the rumors.

I recalled a cartoon I'd once seen in The Wall Street Journal where a school guidance counselor says to two parents, "Your son is vicious, mean-spirited, dishonest, and likes to spread rumors. I suggest a career in journalism. And rumors could lead to panic. It occurred to me that this case had to be wrapped up quickly. The reporter was now back in front of the Gordons' house, and she informed us, "No one is saying if the Gordons' murders were related to their work on Plum Island, but police are investigating.

Penrose turned off the volume and asked Mr. Foster, "Does the FBI want to be publicly connected with this case? Nash said, "The Department of Agriculture has no official interest in this case since there is no connection between the Gordons' work and their deaths. The department will issue no public statements, except an expression of sorrow over the murders of two well-liked and dedicated employees. He looked at me, a little surprised and a lot annoyed, and replied, "I'll… thank you for reminding me. After a minute of public relations chitchat, Max said to Messrs.

Nash was leaning against a kitchen counter looking at me. We stared at each other, the two dominant males in the room, if you will, and we decided without a word that we didn't like each other, and that one of us had to go. I mean, the air was so thick with testosterone that the wallpaper was getting soggy.

I turned my attention to Max and Penrose and asked, "Have we determined that this is more than a homicide? Is that why the federal government is here? I continued, "Or are we just assuming that it is more?

Did I miss a meeting or something? Ted Nash finally replied coolly, "We are being cautious, Detective. We have no concrete evidence that this homicide is connected to matters of… well, to be blunt, matters of national security. I remarked, "I never realized the Department of Agriculture was involved in national security. Do you have, like, undercover cows? Foster butted in before it got nasty and said, "We're here as a precautionary measure, Detective.

We'd be very remiss if we didn't check it out. We all hope it was just a murder with no Plum Island connection. I regarded George Foster a moment.